Every Plan is a basis for change

Posted by Retirement Alchemy on October 2, 2012 in Uncategorized

Every Plan is a basis for change: so we are Moselle-ing  over to Strasbourg.   We have made some major changes to our original plan to go down to a place called Auxonne  (near Dijon) for the winter. This winter moorage was at the end of the Canal d’Est sud branche: shallow water (less than 1.6 meters deep),  300 kms long and 115 locks in less than three weeks of foggy mornings and iffy weather. We considered our options and decided to head to Strasbourg  through Moselle country which was half the distance and half the number of locks and really nice wine along the way.  More about that later.

As I mentioned, in the last human blog, we are in the killing fields of Europe. Our port of call in Verdun is WWI central for the French, and was a very instructive and moving experience for us. The Verdun region was heavily fortified by French garrisons after they lost the region of Alsace during another war with Germany in the 1870s. These forts were the focus of German troops after war was declared in 1914. The to-ing and fro-ing of French and German armies was a common occurrence in this area and it appeared everyone thought the war would be over quickly. But wars are easy to start and much harder to stop, and this one kept going  for four terrible years.

For most people WWI was a battlefield somewhere else in which 9 million young men lost their lives, but in the Lorraine region of France it woeful experience. The battle for Verdun was where the French and German forces lost over 500,000 young men, plus countless injured and deformed soldiers, in a battle that lasted 300 days of constant shelling in 1916. It ended in a stale mate as the combatants moved to the Somme for an even more bloody battle.

WWI affected so many families including my own. My father’s uncle was killed at Arras in the northern France – he was 16. My grandfather (who I never knew) was at Gallipoli, he survived the war but was a broken man who died in 1933. With Remembrance Day on the horizon, and Canadians, Americans, Brits, Australians and Kiwis all remembering this bloodiest of wars, we thought long and hard about this very French battle.

Our visit to Verdun included a visit to the Verdun Memorial, which vividly depicted the appalling conditions in which these soldiers fought. The most stunning part of our tour in this area was the visit to the Verdun Ossuary where the bones of 130,000 unknown soldiers from both sides are in the crypt of a huge building that shows the magnitude of the battle for Verdun. The story goes that the farmers returned to fields in 1919 and 1920 to plough the land only to find it littered with the bones of unknown soldiers. So the local bishop decided to begin work on the Ossuary  to give these young men a final resting place. It took ten years to build but now is terrible reminder of the destruction men can wreak on each other. 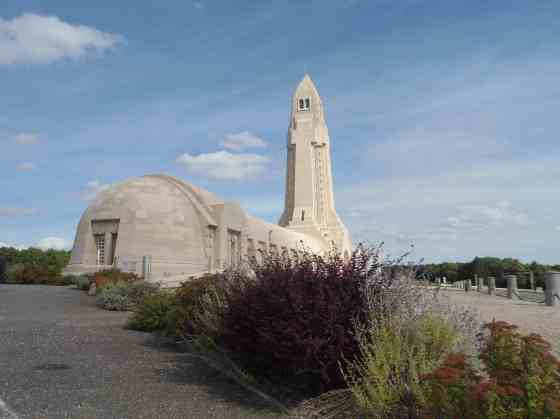 WWI was battle of empires: the French, the Prussian, the Austro-Hungarian, the Ottoman, the Italian and of course the British. It was the last of the great battlefield wars – war took on new face after that because it was fought in the streets, at sea and in the skies killing men and women, civilians and soldiers alike. I was impressed by this museum because it did not just commemorate the French losses but also acknowledge the loss of German youth and the futility of it all. There is a large concrete plaque laid down forty years after WWII, in the 1970s, by the heads of state of both France and Germany expressing the sorrow for the loss of this generation and a determination that wars will never again happen in this part of Europe.  Happily we live in relatively peaceful times. I am impressed by the ability of Europeans to put their terrible past behind them, while not forgetting it, and get on with creating a future together.

Verdun was an impressive town – with a great citadel commanding the crossing of the River Meuse . The harbour had a central location, which was not secure. We found this out because someone took one of our expensive Ikea chairs from the back deck. I woke up as I felt the boat rock, but by the time Martin put his head out the hatch there was noone around so he thought it may just be a wake from another boat. We fired Kerry as watchdog as she did not bark at (fast asleep I assume) but could do nothing else. Anyway, it ticked us off a bit because we usually locked our outdoor furniture up but did not on that evening. The theft left a bit of a bad taste but a good reminder to lock everything down.

Moving down the canal we arrived in the town of Commercy. We actually did not make it into Commercy but were locked out (so to speak) because our automatic lock opener did not work and the lock system shut down at 18:00. We arrived, in the pouring rain, at 18:30 only to discover we could not get into town (after 13 locks from Verdun) . So we parked just outside the lock , putting stakes on the bank and settling into the wilds of the Meuse canal, using our plank to get ashore and take Kerry for a walk. Next morning we went into town, moored at the serviced halte fluvial which was located beside the local velodrome. Walking into town we found a delightful small town with a Chateau belonging to the former Duke of Lorraine, who was also the former King of Poland.   Chateau Stanislas as a stunning example of the type of lives lived by the French aristocracy. His name came up later when we went Nancy and visited the amazing Stanislas Place. We had another purpose in Commercy and that was to get on the train to Nancy to pick up my mum and my friend Norma from Canada.

My intrepid mother (aged 85) and my pal Norma (74) joined us for 4 days on the boat. We spent the rest of the day in Commercy and then left for the town of Toul on a lovely sunny day, stopping over night on the way. Mum and Norma enjoyed hanging out on the back deck as we cruised through the canal and in and out of several locks. Our sunny day was followed by a rainy one – we were still underway so they spent the time down in the saloon while Martin and I focused on getting through some really big locks to Toul.

Toul was an interesting town, however we arrived on a Monday when nothing was open (shopping hours in France seem to be 9:00 – noon  then 14:30 to 19:00 Tuesday to Saturday – unless you own a bakery and you are open everyday). We wondered around town but my mum is not the fastest of walkers so we were a little slow, plus we could not find a supermarket so ended up in a café. The next day the weather was atrocious so we stayed in Toul – Mum was happy to rest, but the rest of us wanted to get out. We hired a taxi to take us to a hyper store where ‘we shopped til we dropped’ and returned with lots of goodies. That evening Norma took us out to a lovely (quite expensive) meal at a local restaurant, this featured local wine and tasty meals and yummy desserts .

We had to get out early next morning on the train to Nancy to take Mum and Norma to their train back to Belgium and the UK . It took 20 mintues to get from Toul to Nancy on the train – it took Martin and I  two days. Getting to Nancy was well worth the trip. We planned to meet Martin’s sister Carol and her partner John in Nancy. We arrived early in the Port of Nancy and took a bit of a tour with the shopping trolley (called a sholley) in these parts. After Carol and John visited the boat (and had a soothing glass of wine after a terrible journey from the UK) we took an evening tour of Nancy – which was a bit like going to a magical land – this was Stanislas Place at night. 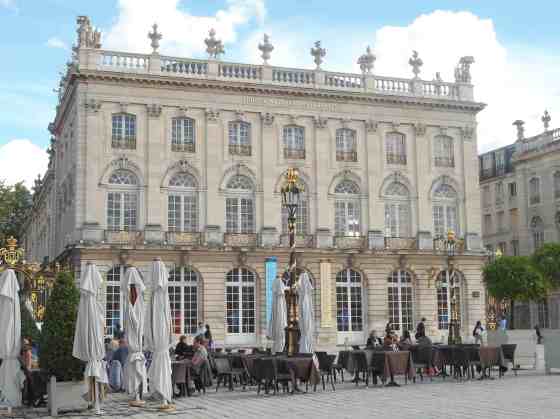 Stanislas was the deposed King of Poland, after the War of Polish Succession in 1733 he was given a consolation prize – the title and lands of the Duke of Lorraine. He in Lorraine from 1737 to 1766 and certainly made his mark. Not only did he have several Chateaus in the area but built a magnificent square, which has been declared a world heritage site. It is breath-taking by night and by day. When we closed our mouths (cos we were all truly gobsmacked by this incredible place) we found a great cheese restaurant . Yours truly was in heaven (cheeseaholic heaven that is ) as we sampled some of the local fare with cheese on it!.   Nancy is also famous for its wonderful Art Nouveau – indeed it even had its own school made famous by Emile Galle. The architecture was incredible and the museum of At Nouveau furniture and object d’arts rivals the Museum de Orsay in quality but not in quantity.   Nancy is a gem in France that is really worth the effort to visit – no matter where from.

Living in France though, makes me grateful that I am not a recovering alcoholic, celiac, lactose intolerant vegetarian – cos I would be in deep deep trouble! The next picture was taken at lunch in the Café Excelsior in Nancy – it was like stepping back 100 years in time (except for the prices). Beautiful surroundings, formal waiters and really nice food.  (Google images School of Nancy).

Back to our directional changes. In August we thought of going through the Vosges to Auxonne. We had in fact booked and paid our winter moorage, but as usual, we were a bit late . This time of year was not the best  for such a  long distance – it is dark and misty in the morning, mountainous (or hillyous if you are from BC )  with low water levels, lots of locks and not a lot of time.   We have been told that we forfeit at least a months rent for not going to Auxonne – so it looks like we have another fight on our hands with a company called H2O, as we had no contract that required us to pay this money up front for our moorage.

We have learned some lessons doing business in Europe

Lesson number 1 – Don’t book ahead unless you are definite about when and where you are going to be,

Lesson number 2 in Europe – never pay until you have the goods,

Lesson number 3 – never pay unless you know what you have bought is ‘fit for purpose.

So we are going now through rural Alsace after passing through the region of Lorraine (think Quiche Lorraine) to our winter destination of Strasbourg . Thus we are into the final stretch of our summer sojourn. We will pack the boat for winter in about 10 days – it will be a change of address for us – but we are not quite sure where.