Time in England – to rest and tell family stories.

Posted by Retirement Alchemy on December 16, 2012 in Uncategorized

After an incredible trip to Canada we returned to the UK for a rest and relaxation in Hull. Weather-wise we had no expectations of much more than cold, wet and windy so we could stay quiet and warm at my mother’s home. As it turned out the weather was much brighter than we expected, and quite a bit colder with nothing like the November wind storms of Victoria. We had some bright sunny cold days interspersed with the odd downpour, but the air was damp. We spent time reading and writing, taking care of my mum who enjoyed the attention, the shopping, the meals and the good company.

Perhaps I should tell you that my home town is located in East Yorkshire , England. It is a major port on confluence of the River Humber (more an estuary than a river) and the River Hull.  You can locate the city by locating the Humber Bridge – until recently the largest single span bridge in the world.  The city was given a royal charter and became known as Kingston upon Hull in 1299.

Since those early days it has been a fishing port and now a major export/import port for goods going and coming from the European Union. It is essentially a poor town.  It has always had high unemployment and its physical isolation from the rest of the country has made it a backwater with a population of about 300,000. I recent discovered it is actually the 10th largest city in England I am not sure about the names of the other nine). As a bit of a backwater, Hull (like Victoria) has always been left wing in its politics – the roots of social justice are long and strong, surfacing through people like William Wilberforce who led the fight to abolish slavery between1789 – 1833. Other well-known left wing folks include the former UK Deputy Prime Minister – John Prescott (now Lord Prescott) and Sir Leo Schultz.

Wandering around the city Christmas shopping etc we walked by the City Hall to see the statue to Sir Leo Schultz , unveiled at the City Hall in 2011.  I mention Sir Leo because he was a relative of my mum, by marriage. My family and their ancestors are not prone to doing ‘great things’, brilliance or artistic genius, we are very ordinary average  (one might say even boring) lot whose roots go back in the area for over 1000 years (as is the case with my mothers family to the Vikings). Sir Leo was the son of a Polish Jewish immigrant to Hull who arrived around the turn of the 20th century. He was obviously a brilliant man, as he passed his exams to Oxford in 1915; however he was not allowed to take his place and was told that being Jewish and having a working class background meant he was not suited to such a lofty place as Oxford University. Undaunted, Sir Leo, became an ardent and active socialist, who was elected to Hull City Council in 1926. In 1919 he fell in love with and after 10 years married my grandmother’s sister, the lovely Kitty.

Leo had great foresight and was able to persuade the Hull council to start building air raid shelters in mid 1930’s. He, like Churchill could see the dark storm brewing in Europe and believed that Hull would be easy target. This foresight saved many lives and kept people safe.

Leo was Mayor of Hull 1942-43 through the worst of the Hull Blitz in which 90% of the housing stock was damaged and 1200 people were killed. He shepherded his city through these terrible years and worked as an Air Raid Warden, for which he received the OBE.  He was a Councilor for over 50 years. Kitty also became a city councilor (probably so she could see more of her husband), supporting the cause of social justice in her way. Kitty died in 1975 and Leo died in 1991.

Leo (called the Lion of Hull) walked his talk in his domestic life and took in two children, Bob and Renate, from the Austrian kinder-transport in 1937. He was a reformist in every aspect of his life including his religion, but Leo and Kitty (who converted to Judaism) always acted to save lives, as all life was important. Bob Rosner was a nine year old boy when he was sent to safety by his parents. Bob has his own remarkable story told in his book “One of the Lucky Ones” but I will leave that or another time. Bob Rosner, whom my mum knew as her ‘cousin’, never returned to Austria to live. but remained in England until his death a few years ago.

Our visit to the UK included bit more sight seeing including a trip to York and taking a day or so in Leeds. Leeds is a major financial and insurance centre for the UK with a population of about 750,000 . We drove there from Hull which took about an hour along the M62 passed three major power station including Drax – the largest coal powered power station in the UK with 10 cooling towers and two smoke belching chimneys.

Leeds is called the hedonistic capital of Yorkshire  (and the North of England) with lots of restaurants clubs and pubs. We ignored the latter opting for an evening at the theatre watching the Alan Bennett version of “A Wind in the Willows, which was a hit with the children in audience but not with us. We were pleasantly surprised by Leeds though – I thought it was a bit of an industrial wasteland but it turned about to be a sophisticated inner city with a wonderful town centre, and excellent shopping.  (Parking was very expensive though).  As we were in the Christmas shopping period the Victorian arcades were decorated and looked lovely. 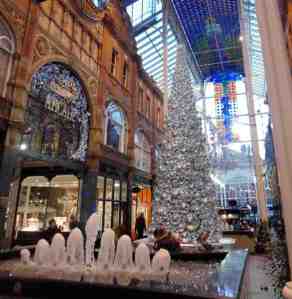 Leeds was also the home of the Henry Moore Institute and the Co-operative movement. The Co-operative movement was the early response to the appalling conditions of urban development, the Industrial Revolution, and the exploitation by factory owners. Now the movement covers half the world (including Canada), espousing a philosophy of advocacy, shared work and responsibility and shared rewards.

After three weeks with my mum we set off to visit a few friends and family heading down to St Albans to see my friend Abigail get her Masters of Arts in Education. It was a dark and stormy drive but worth the visit. The next day we set off to the wilds of Wales (well nearly – Gloucestershire really) to see Sarah in her new home in a little village near Ross on Wye. This is a delightful corner of England bordering on Wales is full of picturesque villages and market towns.

Our journey from Gloucestershire to London took to the village of Avebury. Here the ‘henge’, a pre-Neolithic now World Heritage site, consists of two standing stone circles and an outer bank , which could have been a fortification .  Avebury is a site honoured by modern Pagans, as well as a beautiful village full of thatched houses and Victorian churches.

Catching the afternoon light we walked around the standing stones and through the village – stopping in the Red Lion for a late lunch. The chalk Downs were bleak and wintery, Silbury Hill ( another man made structure close to the village) was in the distance – quite the mid- winter scene. By December 22nd there would be a number of Druids and Pagans in the area celebrating the Solstice and the return of the sun.

We pressed on to London to stay with Martins sister Carol, who made us very welcome. She organized lunch with an old family friend, gave us their small apartment to stay in.  We took a visit down Oxford St to see the lights.

The next day I went to Hull to see my mum  for a couple of days and Martin had a melt-down cos our (new) old (1996) Peugeot 106  Pew refused to start.  Apparently diesel engines also do not like cold weather and our car was positively unhappy about waking up and going on a -6C morning.  My mechanically minded genius husband worked through his consternation and got Pew going again with the help of a wine cork and glue (don’t ask) just in time to transport us to Europe via Dover to Brugges in Belgium and dear old Dordrecht – our next stop.

We are having a European Christmas and New Year in England, Belgium Holland France and Germany which is where, Christmas, as we know it, has its origins. So we would like to wish all our readers across the globe a very Merry Christmas and I will do my best to describe our adventures before the New Year.

If you miss our Christmas stories then we send you our best wishes for a prosperous, peaceful and healthy New Year.  Our European Sojourn will continue in 2013 and hopefully you come along with us.

3 comments on “Time in England – to rest and tell family stories.”