Germany to Spain – via France Part 1

Posted by Retirement Alchemy on January 14, 2013 in Uncategorized

We are now in Spain, having left France on January 8 in a blaze of sunshine and weather that has been getting warmer and drier as we move south. The words and more especially the tune of Grateful Dead’s greatest song, in my opinion; “Truckin’ “ have been in my head for a few days now – along with Willie Nelson (On the Road again)  and Paul McCartney ( Long and winding road) as we have covered a fair few clicks over the last while and seen some lovely places. I hope my comment has just put the words and tunes to one of these songs into your mind that way you can travel along with us and experience the same craziness! LOL).

There is such a sense of freedom here in Europe – Martin and I crossed the border between France and Germany 4 times on January 3 (taking my mum and Joan to the Basel Airport and visiting our boat in Saverne). We crossed from Germany to France again the next day leaving the safety of Brigitte and Peter’s house and go out on the open road. We crossed the border to Spain – the only announcement was a sign on the road and a change of language (no passport, currency or customs control). It is really quite amazing that these very sovereign countries can live with such openness.

When I think of the sights I have seen on this trip, of the killing fields of Europe and the loss of the life at the behest of arrogant politicians, I am heartened by the fact that the winners of this year’s Nobel Peace Prize were the leaders of the European Union. The Nobel Prize (given by a manufacturer of dynamite) was awarded for creating a peaceful, stable cooperative continent where the people prefer harmony to strife, and economic growth to military expansionism. I know it is not perfect – but – hey – it has worked for the last 50 years or more and resulted in an improved standard of living for all, facilitated cultural and economic exchanges and sense of physical security and sovereignty for its citizens. What more could we wish for – because in this European game there are really no losers (despite the plight of the Euro). Perhaps Africa could adopt the same model and save itself from the greedy dictators and socio-pathic leaders. This model of economic cooperation might save the continent and its environment, animals (especially the big animals) and people. Rant over!

We started our journey from Freiburg and headed to the French town of Bescancon . On the way we made one of many architectural stops at a tiny town of Ronschamps where a famous French architect – La Corbusier (aka Charles Edouard Jeanneret) built an amazing church in 1950. The small order of nuns of Haut Marie (Mary of the Heights), asked this architect to design and build a new church which has become a place of architectural as well as spiritual pilgrimage. When we arrived there it was surrounded by mist, which added to the mystical quality of the area. We did not stay long as it was cold, damp and foggy.  However one of the joys of travelling at this time of year is the absence of crowds. We almost had Ronchamps to ourselves. 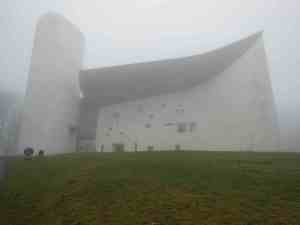 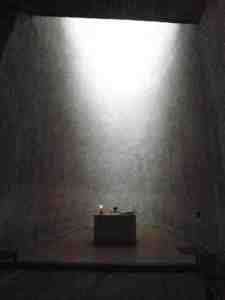 We drove on to Bescancon (about 220 kms north of Lyon) an incredible Louis XIII city with an amazing fortress at the lower level and a citadel on the hills above the town, and the birthplace of the French philosopher Victor Hugo. We stayed the night here and had chance to wander the streets of this World Heritage site (one of many on our trip) and experience this Renaissance city full of art and history.  The next day we moved on to a completely different environment from the Doubs River valley to the lovely vibrant modern city of Grenoble in the French Alps.

We had considered driving south through Switzerland, but Pew is a very old car, a bit clunky on hairpin bends and slow going up mountains so we decided the straight flat route was probably the best way down to Spain. But we could not resist a trip into the French Alps and arrived in Grenoble on a lovely sunny evening with the sunset on the mountains and colours reflecting across the skyline. We stayed in a quite nice hotel: the Europole.

I have discovered that you get what you pay for in hotels – and the extra €15 over the basic gets a much nicer place often with breakfast/free parking and/or no dog charge {€5 – 7}. Traveling in winter has the advantage of being able to stay in quite nice places for a reasonable amount €70 – €80, in addition there are fewer people on roads, visiting sights and eating in restaurants. I know the weather is often a problem but after the rain of this summer in Europe, weather was not an issue for us. The major disadvantages to traveling in the winter are shorter days and possibility of attractions/hotels being closed. Our biggest concern was connectivity but as you can see – we had that one covered. 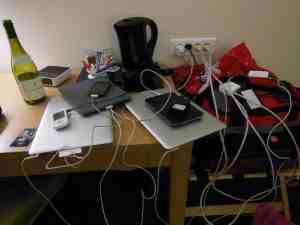 Grenoble was a delight both by day and by night. We took the tram down town shortly after our arrival and walked around and had a bite to eat plus a glass of wine. It was not unusual to see people walking around carrying skis and boots etc – having just come back from the mountains. Remember the 1968 Winter Olympics were held here.

The next day we took the cable car up to the citadel (every French city has one) on the side of the mountain – just for the incredible view. Grenoble is at the confluence of two rivers running through glaciated valleys. Our trip up the mountain side was in some ball shaped cable car Les Bulles  – it felt like we were in the middle of a Christmas decoration being mounted onto the tree. Kerry was not keen on the ride – although it only took about 4 minutes. Luckily she is a bit short sighted so could not look down! We had coffee and one dessert between the two of us in the very expensive restaurant at the top of the cable car sitting outside in the alpine sun soaking up the view.

Shortly after that we were on the road again to our next stop – Arles in the lower Rhone valley about 250kms from Grenoble. 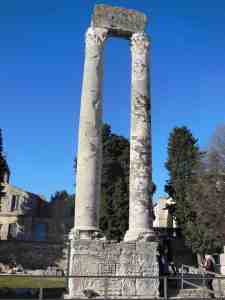 Arles contrasted with Grenoble firstly because it was in the Rhone delta – flat flat warm wine country, with not a mountain in sight. Secondly Arles was different because it was a major Roman settlement with some incredible buildings still in use! 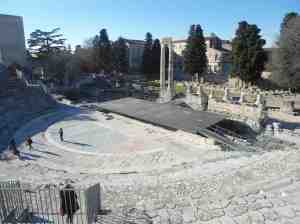 It is another World heritage site and had some major Roman monuments  – the amphitheatre, coliseum (still used for bull fighting), Roman baths and fortifications along the Rhone river. The Romans were very active in this area – which is an incredibly rich agricultural region – especially for wines (think Langeudoc and Provence). The climate is quite dry and very pleasant for January ( 18C) .  Walking through the ancient and more modern buildings (Renaissance and Baroque) allowed my imagination to roam through the centuries and considering how other civilizations lived and grew. 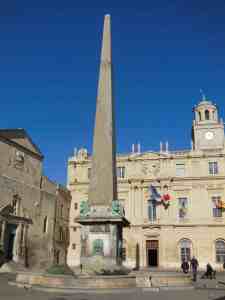 We moved on through the Carmague – with its wild white horses and 3 metre high bulrushes to the Medieval city of Aigues Mort. Martin’s sister has a holiday home here along the canal that connects the Rhone to the Midi. She had allowed us to use her address as our mailing address in France and it was time to pick up some documents. 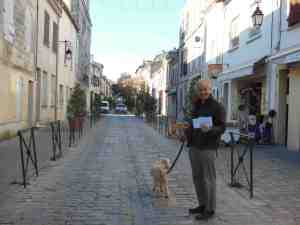 In 1245 Pope Innocent IV called upon European kings to lead the crusade to take back Jerusalem and the Holy Land ( now Israel and Palestine). Louis IX of France lead the 7th Crusade and saw the advantage of gaining access to the Mediterranean shore. He built the fortress of Aigues Mort on the swampy disease ridden Rhone delta . By 1248 Aigues Mort was a flourishing port which became a completely walled city by the 14th century. The second and more important strategic advantage of Aigues Mort was its location near the salt making area of the Camargue. The production of pure sea salt continues today.

Aigues Mort (a World Heritage site) was a delightful surprise on a lovely sunny day, while the holiday homes are on the canal, the town itself is inside the well preserved walls of the significant port/fortress dating back the Crusades.

We moved on in the afternoon to Sete – a really busy French port/ferry terminal/ holiday spot where we stayed the night in a cheaper hotel before heading out to our first Spanish destination – Barcelona.

Little did I know on that my mind was about to be blown yet again by beautiful beautiful Barcelona –  more in Part 2.