Soccer, sailing and suffering in the Netherlands.

Posted by Retirement Alchemy on July 19, 2014 in Uncategorized

Before you read the regular blog, which has been prepared over a few days, I would like to express my sympathies and send my condolences for those people of all nations who lost relatives, friends, and loved ones on Flight MH 17. The Malaysian Airlines flight out of Schipol was shot down by the Eastern Ukrainian ‘rebels’ on July 16 2014. Over half of the people (298) on the plane were Dutch – so as someone said on FB, this is like the Dutch 9/11 (USA) or 7/7 (UK). Dutch people, who are as stoic as they come, are in shock, and know the only things they can do, as family members and loved ones, is to grieve, bring flowers, light candles and hope the international community will bring the perpetrators to justice – this was not war, it was murder.

This despicable cowardly act was, I hope, a mistake made by stupid, blind fighters, who actually did not know what they were doing. My hope is that these innocent passengers did not die in vain, and the universal condemnation of the shooting of this plane from the sky will result in a withdrawal of Russian support for the Ukrainian ‘rebels’, removal of their war toys and some kind of lasting peace. Next month marks the centenary of the beginning of World War I, nine million young men died in that conflict. “Lest We Forget” that war is not an option and no more innocent people should die. (Rant over)

The soccer part: Now the World Cup is over, so it is easier to concentrate on the blog.

It was a real pleasure to be in the Netherlands when they were doing so well. From a boat we could hear horns, hoots and yipees from the surrounding area whenever they scored a goal, and had firework displays and very happy if somewhat inebriated Dutch people on the street when they won. They were even jumping in the canals in celebration of their first win and literary whooping it up in the freezing cold water. Some of the games finished at midnight on a ‘school night’, but that was completely irrelevant to the Dutch who were ready to celebrate and savour every moment. Their unlucky defeat to the Argentine in a shoot-out was a bit of a downer for the whole of the Netherlands (but we had already left the country). Shoot-outs are not a good way to decide a football match – I think after extra time they should just play until somebody calls. But what do I know? 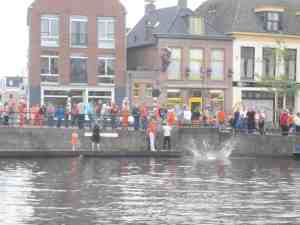 Jumping (in) for joy at their first win.

Anyway the final match – Germany versus Argentina was a gripper and I think both teams played well. The Dutch may have been secretly happy not to play the Germans in the final. The Argentineans played well and did not let their country down, unlike the uncoordinated Brazilians who lost 7- 1 to Germany, and 3-1 to the Netherlands. The Germans have always been a powerhouse in the soccer world but have not won a World Cup for over 20 years. Dr Angela Merkel (the German Federal Chancellor and football fan) attended the game and greeted the team after they won the game 1 – 0 in overtime.

My only direct experience with the World Cup was in 1966 when England won over Germany in overtime after some controversial referee decisions. The problem was I was in Germany at the time and even staying in the same hotel in Augsburg as the German soccer legend – Franz Beckenbauer. Needless to say, I kept a low profile for quite a few days after that game, but that was a long time ago and England hasn’t got close to a World Cup final since those heady days.

Back to the continuation of our sailing sojourn:

In mid June we spent a few days preparing the boat for visitors when we got back to Sneek. Our friends Jane and Joe arrived after a long complicated flight to Amsterdam on their way to Spain (and the Camino de Santiago). Martin took Scarlet (the Toyota) to meet them and gave them a little tour on the way back to Sneek (two hours over the Ijseelmeer dyke). Jane is a very close friend of mine, we met having babies in the hospital many many years ago. She worked tirelessly for the homeless in Victoria for many years, and now runs her own specialized moving company for seniors – ‘Changing Places’. Her husband Joe is a GP in Victoria and has devoted his professional life to caring for the poor and the forgotten street people of the city. Joe is also a football fan so was really happy that we had TV and enjoyed watching the World Cup games. They spent almost a week with us recovering from the flight and experiencing the wonders of Skookum and preparing for their Camino.

Joe and Jane in Sneek

A day or so in Sneek recovering from jetlag was followed by an ocean (well as close as Skookum will ever come) voyage across the Ijseelmeer. The Ijseelmeer is a fresh (sweet water) inland lake created in 1932 from the old ZuiderZee (saltwater) when they built Alfsliutdijk. It is the largest lake in Western Europe. Crossing this lake was quite a feat as Skookum was a little wobbly in moving seas. We left the seaside port of Stavoren crossed to Monnikerdam (a delightful small port on the western shores of the Ijseelmeer) a distance of about 20kms. 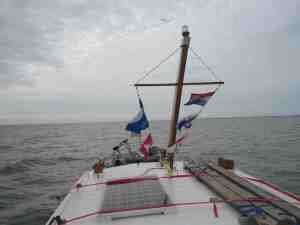 In 1975 the Ijseelmeer was further divided to create the Markermeer when the Dutch engineers in their quest to reclaim more land built the Houtribdijk (where we went through a lock) to create another lake. Again we were on Hanseatic League coastline – many of these tiny ports on the Ijseelmeer had been around for many centuries.

It was quite cloudy and windy when we left port, so we all donned our life jackets (including Kerry) and got out to the centre of the lake. The weather calmed at that point and we were treated to flotillas of Dutch sailing barges and Friesen barges called Skuzies.

The crossing took a couple of hours or so and we followed the buoys into Monnikerdam (which is right next to the village of Edam on the North Holland Coast). We celebrated the Solstice in Monnikerdam on the back deck of the boat with Pimms and champagne, listening to the oldest carillon in the world. 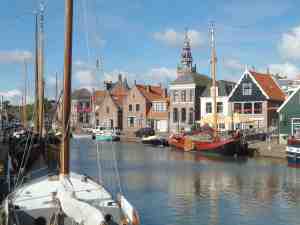 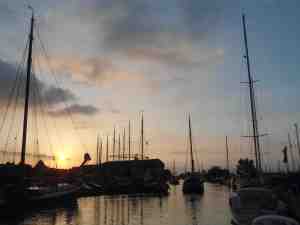 The next day we motored down the canal to Amsterdam and moored at ‘Six Haven’ across the river from the railway station at Amsterdam Centraal.

Jane and Joe were very impressed with our downtown location at Six Haven – we had been there before in 2011 when we had a charter boat with Melanie, Mike and Ayja. We took the free waterbus across the canal and then took a cruise through the Amsterdam waterways (too small for Skookum).

Then we walked through the Red Light district of Amsterdam. Joe’s eyes were popping as we walked through the narrow streets. As a doctor he had worked with the street people (including many beggars) of Victoria who were drug addicted and mentally ill, living in dire poverty and seeming despised by the greater society. So the controlled openness of sex and drugs on the streets of this smart city was completely new to him. The tolerance of the Dutch people and government towards drugs and sex trade workers is well known, and their philosophy of harm reduction is interesting to see in action. There were police (known as the Politie) on the streets but there was no evidence of violence, sinister behaviour, or sorry looking homeless people begging on the street. There was very little trash or dirt and no hassle for observers like us and the other tourists, just people going about their business – keeping an eye on the next soccer game.

They spent their last evening with us in the Six Haven getting ready for their flight to Bilbao. The next day we went to the Rijks Museum, which had recently opened after a ten year renovation. The Rijks museum was originally built around 1808 – 1810 specifically to house the Dutch masters – you know the Rembrandt, Van der Heist, Vermeer, Franz Hals and the later, but still famous, Vincent Van Gogh. Visiting the Rijks Museum was like taking a living art history course – looking at the paintings, the brushwork, clarity, realism and the documentation of the times was awe inspiring. The museum itself was a wonderful piece of architecture, beautifully renovated and well organized. At €15 for a ticket it was a wonderful deal and kept us agog for a number of hours. After our visit to the museum we took our visitors to the train so they could catch their evening flight to Spain.

Martin and I decided to hang out at Six Haven for a few more days and take a couple more days of sightseeing in Amsterdam. Amsterdam was founded around 1300 and rose to prominence as a major seaport by the seventeenth century. Amsterdam became a global city at the centre of trade between Europe and the Americas, and Europe and the Dutch East Indies (aka Indonesia). This history as a trading city has created an international centre of commerce, and a major European centre of culture. Architecturally Amsterdam is a gem and needless to say Martin enjoyed the variety and complexity of the concentric circles of canals, warehouses and wonderful merchant houses. The only tourist attraction we didn’t see was the Heineken Brewery, which is no longer a real brewery and has become a corporate information centre and theme park.

One of our most interesting evenings was spent with a young British retiree (53) who had sailed across the North Sea from Gateshead to the entrance to the North Sea canal just outside Amsterdam in a 14ft open sailing dingy – a distance of 323 miles! Mark bemoaned the loss of the spirit of adventure in the UK and recounted couple of instances where he had been rescued by the UK Coast Guard. Mark was a very serious, if somewhat crazy (in my eyes), sailor who wore a dry suit while sailing; he slept and ate for two nights in his open boat. He was planning to sail the Isjeelmeer then return to the UK and go gliding for a holiday. 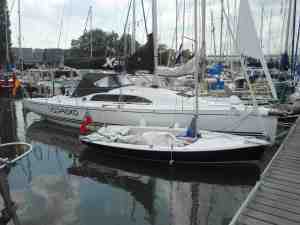 After talking to this intrepid sailor, our sojourn felt quite tame. We left Amsterdam heading west down the North Sea canal toward to ancient city of Haarlem where our next gentle adventures begin.

Some weird architecture on the North Sea Canal

It seems interesting to me that some people deliberately put themselves in harms way to test their mettle and come away exhilarated, after beating the elements. Others are just going about their business, catching flights to places they need to and are suddenly shot out of the sky.

Sometimes life makes no sense at all.

One comment on “Soccer, sailing and suffering in the Netherlands.”