Posted by Retirement Alchemy on August 30, 2015 in Uncategorized 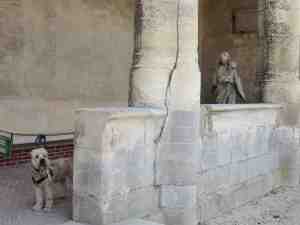 All I can tell you is that it is really hot here and there are lots of dogs – but no bones or balloons celebrating National Dog Day – which nation anyway – maybe it is in the place where my garden is located. This place so far away that I have to sleep in my travel box for many hours and I am loaded onto a flying box in one country and arrive in another place where they speak another language.

The world famous Victoria cartoonist Adrian Raeside captured the moment for me.

Raeside cartoon of dogs being boarded

As a dog I know about 30 – 40 English words but I don’t know any words in any other language. Sometimes people who speak other languages speak to me – and I just don’t understand – but if I either sit down, lie down or wag my tail they seem to think I do. It makes them smile and pay attention to me. 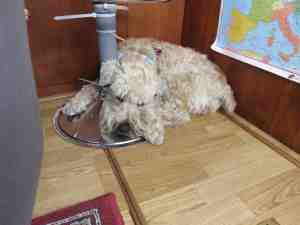 We are living on the floating box and have been here for ages –it has been very hot and I have been a very hot dog without the mustard. Panting is a dogs way of getting cool, sometimes I get sprayed with cold water, at times my humans have wrapped me in wet towels – not sure whether it makes me cooler but certainly wetter. Sometimes Martin takes me to a place where I can walk into the water – I am not a swimmer more of a paddler really. The other remedy for the heat for me is a good haircut. 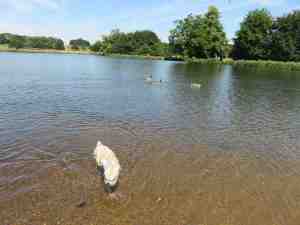 A while ago we took a trip back to see the old lady (Barbara’s mother) and I had a hair cut then. We took the red moving box (the car Scarlett) –which I really like because it is very relaxing. Barbara says moving boxes (cars) actually put human babies who ride in them to sleep. I can sleep in the back of the moving box (car)– unless it is packed with stuff I get the whole back seat all to myself. 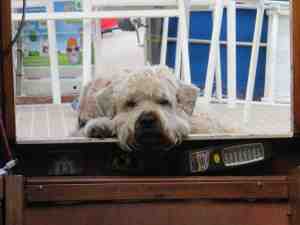 Going for a walk now

We have had a few visitors on the floating box – I like having visitors because they make a fuss of me. There are also lots of dogs on other floating boxes – sometimes we bark at each other as we pass by. Other boats have cats on them – I know I have seen them go for a walk. I can tell the difference between cats and dogs – they smell different and I prefer cats to dogs. One boat we saw had a couple of pet chickens on it, another had a kids paddling pool with a whole tortoise world in it. One boat next to us had a big bird that talks – my humans said it was a parrot. This is the second parrot I have come across on this trip. The other one was when we went to visit Barbara’s mother. She did not have a parrot but someone else we met did.

Parrots are very confusing for dogs because they speak in English. As a dog I know I have to do what humans tell me but I do get a bit miffed when a bird tells me what to do! Sometimes I can’t tell the difference except that humans look and more importantly smell different. But birds are sometimes a problem on the floating box. There are these big big white ones that hiss when I bark at them – well they should keep their distance from my boat. 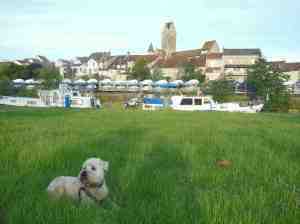 That is one of my jobs – to keep away creatures that could invade the boat. I have barked at horses, cows and sheep – they are all four legged creatures that need to be shooed away. When we are in a water box (lock) I bark and bark – almost make myself horse – so to speak. I also get a bit nervous when I see us going up and down in the water box so I like Martin or Barbara to pet me.

As dogs go, I am quite a talker myself – I understand it is the way humans communicate so when I don’t get the time and attention I feel I need I complain – verbally – or as verbally as a dog can. I also talk (which is different to barking) to Martin and Barbara when they have been away – they don’t always understand what I am saying – but it is usually something like “I am so glad you are back, where the hell have you been and do I get a treat for wagging my tail.”

Another of my jobs is to take Martin for a walk – I understand his health improves the more he walks, and sometimes we walk a very very long way. We wend our way along the canals and rivers, sometimes we play ‘tug of war’ ☺. I like walking when I don’t have my lead/leash on – this lets me have a good sniff (that is another thing dogs are good at). I hear that they are now using dogs (Labradors mainly) to sniff out human diseases like cancer. Did you know that our noses have 300 million smell receptors whereas human noses only have a paltry 5 million receptors? 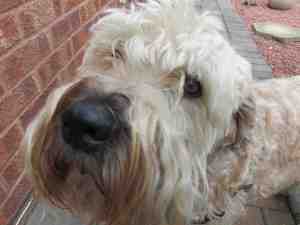 Sometimes we walk to find human food (bread and I don’t like it – tastes of nothing – but the water-birds like it). I am not ashamed of complaining when Martin stops to talk to other humans – he is quite a talker too. 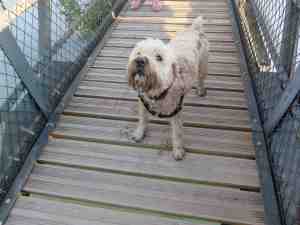 I am talking to you

Anyway we have been on the canals and living on the floating box for ages, but I have my humans, my bed and dog bowls and I eat well every day. When it is hot I am not as hungry, and it has been hot. Please never leave a dog in a car on a hot day – it would be the death of the dog if it cannot cool down.

If there is to be a National Dog Day then I think it should be bigger. Dogs don’t really recognize national boundaries (although we know there are different languages), so let us make it International Dog day and have all kinds of celebrations like stores giving out free dog biscuits and dog bones, off leash days, and be kind to dogs laws that apply all over the world (I understand there are many canines that live in terrible conditions in other parts of the world). International Dog Day should be the day when humans stop and remember how lucky they are to have such loyal, loving and helpful companions. Dogs feel, love and want the best for you. 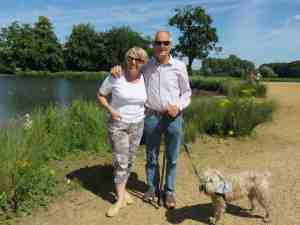 Me and my lucky humans

Signing off now with a woof and a big lick.

← Sauntering slowly southward in a steel ship.
Briare to Decize along the Canal du Lateral a la Loire. →