Posted by Retirement Alchemy on May 19, 2017 in Uncategorized

I had a string of senior moments to start the first day on Skookum this year.

I arose after yesterday’s drive of 800 kilometers across France. The systems are not running so I know I will be working today. I put on my work pants  and then decide to go for some milk and croissants so we can have a cup of tea and some breakfast. Kerry and I leap into Scarlett (our red Toyota Starlet) and head for the U super in Laudun. We had visited Laudun last night in the pouring rain seeking an ATM to get some cash to pay for the supper we had just eaten in a new restaurant in L’Ardoise which had no card terminal yet. They had been open just three days. Everyone in there appeared to be family and the grandfather brought us some mint tea. He was most pleased when I said thank you in Arabic. 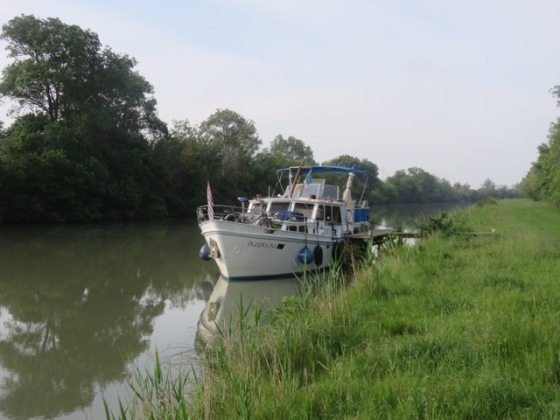 Laudun it turns out is more than just a U super. It is a delightful old hill town with much history as with most villages in France. Ceasar had his camp there for a while and we will certainly visit the museum in the coming days.

I arrive at the U Super and realize that I have changed my pants and so my money so carefully tracked down last night is in my other trousers. No worries I tell myself I will just pop over to the ATM of which I now know the location and get a bit more. I drive to the Credit Agricole ATM, climb out of the car to face the machine only to realize that of course if I don’t have any money then I don’t have my cards either as they reside in the same wallet.

Barbara note: Martin had a similar moment in 2012 in the Netherlands when he locked up his bike at the hardware store and did n’t have the key. The key was back on the boat about 3kms away so he had to walk back for the key and then back to his bike. One thing about that kind of senior moment – it keeps you fit!

Barbara is off on a cruise around Italy with her 90 year old mum for a week after which she is going to spend another couple of weeks with her in the UK. The last few weeks in the UK were a round of parties for Lilian’s 90th in Hull and Wisbech. So Barbara’s cousin Paul also visiting from New Zealand with his wife Emiko for Lilian’s 90th agreed to do the drive across France with me and stay on Skookum for a while until Barbara arrives in Montpelier on the 19th. Emiko returned to New Zealand for her job via Japan to visit her family. I must say that on this our first day he has done a stirling job of washing the decks of their winter accumulation of grime. Meanwhile I have reconnected the batteries, refilled the water system and charged up the heating radiators which were drained for the winter. The Beast as we mostly affectionately call our combi furnace supplying heat and hot water fired right up with a roar hence the moniker. It is basically an oil furnace running on diesel and when the flame ignites it gives a whoosh and a whumph.

The batteries came on line in great shape. The charger only took about an hour to bring them right up. I disconnect absolutely everything for the winter so there are no phantom currents sucking power or causing electrolysis. In fact as I write this I see that there is a 1.3 amp draw registering on the ‘blue ray of death’ as Barbara calls the digital ammeter. I make a note to track down that amp in the morning.

Tomorrow is another day.

It sure is. A deep mass of Arctic air was forecast for the UK and northern Europe and I, smarty pants thought how clever we were to be in the south of France where is was not forecast. Well it is here in the grips of the Mistral. The Mistral started last night and is howling down the Rhone valley this morning funneling icy blasts through the marina at 25 knots. 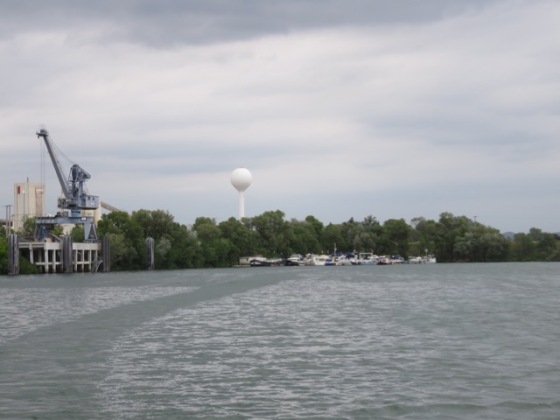 We were however able to start the day in a warm boat with a cup of tea and a hot shower. I found 0.9 of the errant amperage but there is still 0.4 amps unaccounted for. We also have the back deck all sorted for sitting and eating although that will not be happening today. Next is a trip to Orange (the cell phone company not the town) to stock up on SIM cards. Just two really. One for the onboard WiFi and one for my cell. It is less of a frustrating adventure than it used to be 5 years ago in Holland. Having an address and a bank account makes it a lot easier and the EU has passed a number of laws forcing the industry to do a bit of cooperating to the benefit of the consumer rather than the company.  I do remember threatening to sleep on the floor in a KPN store in Dordrecht unless they came up with a gigabyte that they had somehow mislaid from my account.

Skookum outside the Crusader City of Aigues Mort

Since he wrote this blog Martin and Paul have moved Skookum and are now waiting in Latte ( a suburb of the beautiful city of Montpellier). Martin has had a fun time fixing all kind of things on the boat while Paul has been exploring the area by boat ( he went as crew for a sail boat ) bike and with Scarlet ( our Toyota). Paul has been creating in the kitchen while Martin works on the mechanics and does the washing up. I have been in care mode with my mother – but that is in the next blog – promise

← 2017 Family first and celebrating 90 years of life.
Cruising in style around Italy →