Posted by Retirement Alchemy on March 18, 2019 in Uncategorized

Watching the world go by.

Girls with sleeping or drugged babies working the crowd.

Always ask the stranger for directions. I try to help.

“We are your reward”.

A porter assigns me to a blind man to guide him to the train.

He seems capable and competent and unhesitating; but definitely blind.

I am off to Valence to arrange the sale of Skookum, our home of the last seven years.

Mixed feelings but it is time.

The Arsenal marina at the Bastille in Paris

Skookum is in the water. The BoatShed broker, Graham has been and photographed and videoed and VR’ed and filled out all kinds of documentation. Barbara and I have cleaned and removed stuff to storage for a possible next stage of camper van. You know the old shibolith ‘Sail boat, Motor boat, Motor home, Rest home’. I just returned from dropping Barbara off at Lyon airport, St. Exupery for her flight back to the UK to see her 92 year old mum for a week before returning to Canada. We will meet again in Vancouver airport on the 20th. She from the UK and I from Amsterdam. The last time I dropped her at St Exupery I drove away back to Valence not knowing that a crazy man had driven his car through some glass terminal doors and then onto the runway closing the airport for a day. Barbara ended up on the TGV and Eurostar train back to the UK. This time I hung around till the coast looked clear. 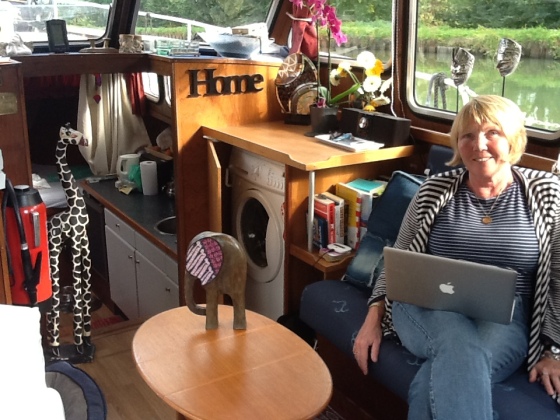 I sit now in the salon on Skookum next to a sign which says ‘Home’ on the wall over the cabinet that houses ‘Cyclops’ our Ikea washing machine. Leonard is crooning from ‘Popular Problems’. A nice glass of Cote du Rhone is to hand.  The last two weeks have been a whirlwind of activity. The first week I was here alone and it was all about getting the below waterline work done before my booking date of March 5thwith the Port of Eperviere to lift Skookum into the water. Bruno from Valence Mecanautic was installing the shaft and propeller. Marcel who had towed us into port last year with a broken prop shaft came to help with the bottom painting. I installed the rudder the day before the lift. Phillipe  who lives under a tree in the boat yard welded up a crack in the rudder in the hours before the lift. 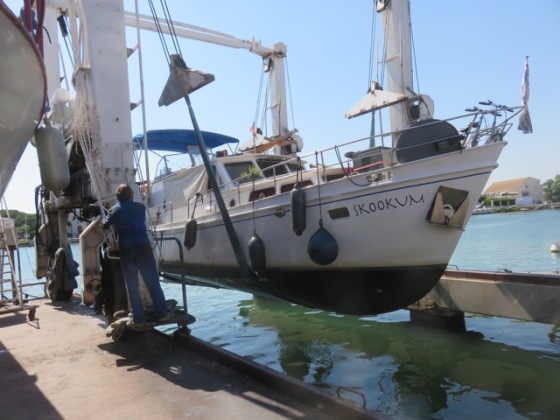 Then Barbara arrived and the two of us have been cleaning up the debris of seven years aboard. It is so much easier to acquire stuff that to get rid of it. Sounds like a cultural statement for the moment as tomorrow is March 15th, the day of the global student strike for the climate.

It’s difficult sometimes just trying to get a grip. The insanity swirling around us is unfathomable.  I guess we all knew that these end times would be somewhat unsettling but with no ‘shaking head in disbelief’ emoji on FaceBook I am not sure that I can get through them.

Somehow when some far away dictator sends police out to round up all the people who don’t toe his line whether politically or sexually it seems as though it has always been so. But following the absolutely nutzoid antics closer to home makes me realize that there is a lot going on out there that is totally incomprehensible to me. In the UK: no deal Brexit looming. In the US: #45. In Canada: Ford and Scheer declaring war on decency.

And yet there are heroes. Mostly women and children.

But back to Skookum.

Why do I want to say ‘She’ has been a skookum boat?

Tradition? Perhaps Skookum is LBGTQ+2 or 3, I do lose track. However whatever her sexual stature she has served us well.

The cover page from the comprehensive Skookum manual: 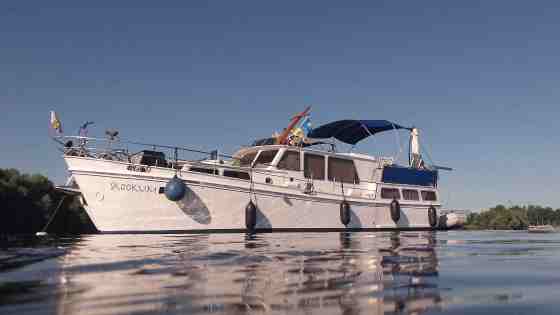 Skookum at anchor on the Havel, Berlin

As a sailor on the west coast of Canada I knew the word ‘skookum’ as a term referring to various jobs one might do on one’s boat. If well done and correct they would be referred to as a ‘skookum’ job. It was not until I used the term in the UK that I discovered that it was not a universal sailing term but was just used on the west coast.

There are many place names in BC such as Skookumchuck narrows which means strong powerful rapids.

When we purchased ‘Skookum’ the paperwork said ‘Dolfijn’ but the boat itself had no name. We were initially not adverse to ‘Dolfijn’ until we saw about 12 ‘Dolfijn’s on our first week on the water. We decided that a new name was needed and appropriate.

Certainly  Skookum has lived up to her name. She has carried us through seven summers in Europe from Berlin to Friesland to Amsterdam, Brussels, Paris and the south of France. She has travelled through the Rhine gorge and the 23 meter lift in the Ecluse de Bollene on the Rhone. She has cruised down the Elbe past the old East German watch towers. She has berthed at the Reichstag and the Bastille. She passed through the 5km long St. Quentin tunnel pulled by an electric towboat. She rode the 1.5km long railway up the hill and the 73m elevator down the other side at Ronquieresin Belgium.

She spent months in Champagne where we were encouraged to drink Champagne as our regular everyday wine. Ayja, my sommelier granddaughter joined us whenever we were in a good wine region. We had many visitors over the seven years. Barbara’s mum Lilian and her friend Joan came every year for a few days. Lilian in her late 80s and the ‘young’ Joan 4 years younger clambered up and down the companion way and became excellent at the ‘boat yoga’ one needs to move around the confined spaces of a boat. Although having been used to a small sailboat Skookum at 12.5m long is luxurious.

Barbara’s son Tim came several times. Melanie and Ayja joined us in Burgundy and Michael and Oliver in Avignon and the Languedoc. 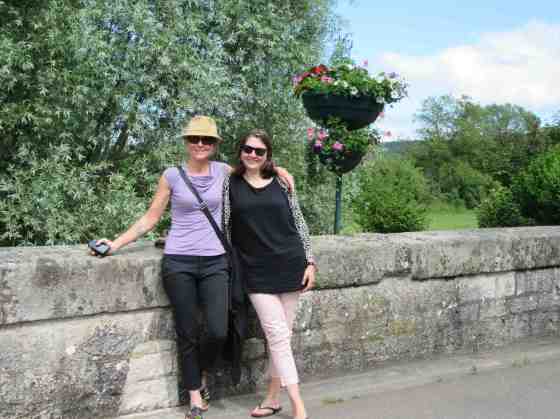 Many friends spent several days with us and sometimes every night was a feast. My ex wife Alex and Tony took Skookum for 6 weeks on the Canal du Midi when we were back in Canada one year.  Tony kindly did some much needed varnishing to occupy his time. He even had a go at organizing the tool locker. 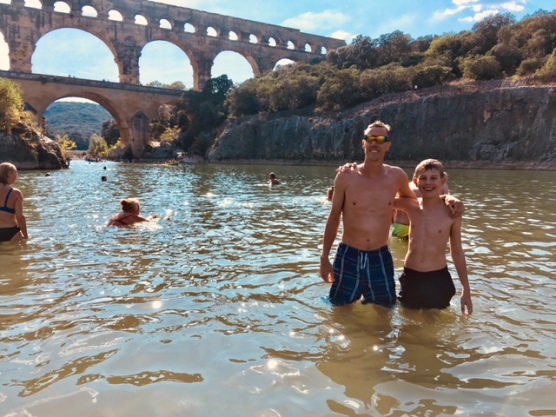 We did a boat swap for 6 weeks with  Monique and Wynn. Their boat in BC is a 41’ DeFever of great luxury and worth five times Skookum however they were keen to do some canals in Europe and we had ‘location, location, location’ as they say. They joined Skookum in Nerac on the Garonne and sailed her to Narbonne on the Midi.

We cruised their boat, the mighty Christina Rose from Victoria to Desolation Sound and back visiting old west coast haunts and anchoring  in places that I had previously been with Chuan, a 30’ sailboat.  Tucking the Defever into some little Gunk hole spots was an adventure. We again had many visitors and each evening was a wonderful gathering. Tim and Neil and Gintare came with us to the spectacular Jedidiah Island and George and Pam and Ray and Maggie from the UK visited for a day cruise out of Victoria. It was quite a treat but the two huge engines definitely sucked up the diesel and we were a bit nervous of all that pristine gelcoat. I was thankful for Skookum’s pre-dinged steel and Uncle Lehman (our engine)  . 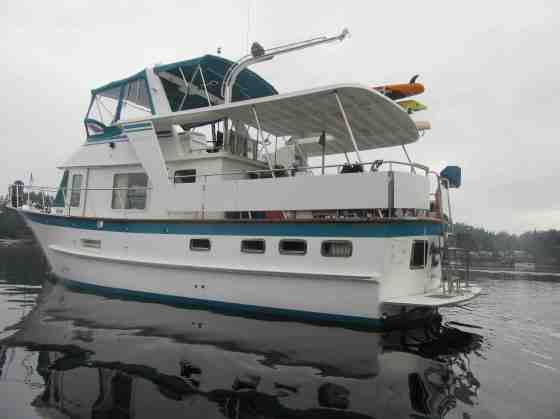 So now the seven year adventure with Skookum comes to an end.  If she sells this summer in Valence then that is good. If she doesn’t sell we will return in September for 6 weeks and take her back into Burgundy where we will leave her for sale. That will be good too. Still a cottage in France! I met some Brits here in Valence who were living on their boat with no plans to go anywhere. They said that their monthly rent in the marina was under €200/mo and was about a tenth of their monthly accommodation expense when they had been living in the UK. Of course like everyone from the PM down they had no idea what Brexit might mean to them. 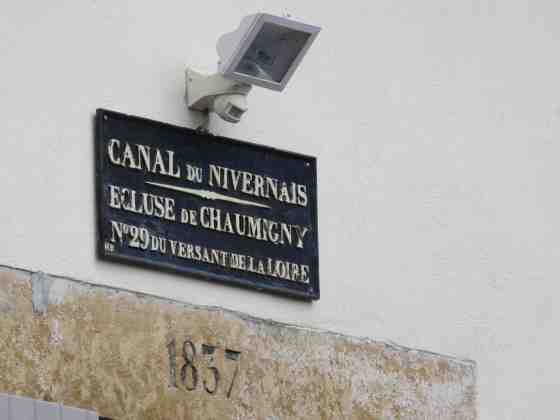 I will post the listing with BoatShed for anyone who is interested. It will also be on Apollo Duck amongst other places. The asking price is €49k. We had been thinking a bit about shares amongst 4 people. Each party would get 6 summer weeks. We met several of these which seemed to work quite well. However we are moving on so if anyone wants to explore this option we can tell you what we know but you will have to put your own consortium together.

There are so many stories and so many friends both old and new. They are all in Barbara’s epic 90 episode blog. Here is just me waxing a bit philosophical and nostalgic as I say my goodbyes to Skookum. 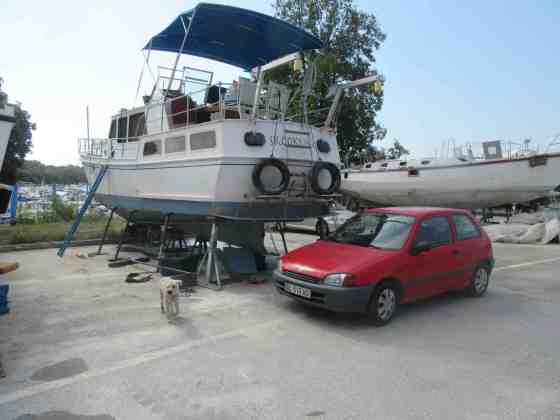 And as always there was Kerry getting into mud and mischief

Thank you Skookum. Thank you Barbara and thanks to all the visitors who made this experience so memorable for us

Skookum is listed with Boatshed.com you need to search river and canal boats, by price and or date ( >30years old )and location (France) . Today March 18 2019 the boat is not yet on the web site but hopefully it will be there by the end of the week.